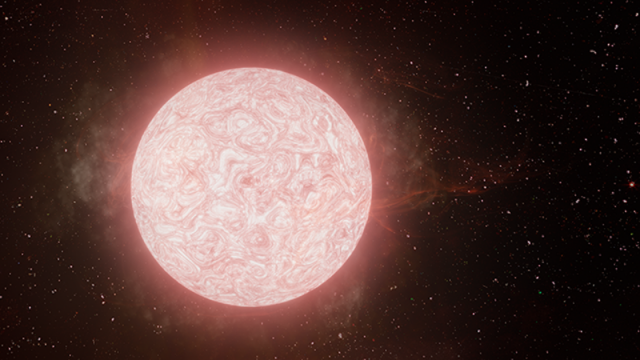 For the first time in human history, scientists have watched a core-collapse supernova from beginning to end, in real time.
The progenitor star was a red supergiant of about ten solar masses, some 120 million light-years away. In its final months, the dying star’s brightness flared dramatically as it cast off its shell of hydrogen and helium. All the while, a team of researchers conducting the Young Supernova Experiment (YSE) were watching — and what they saw challenges our whole narrative of how these stars die.
“This is a breakthrough in our understanding of what massive stars do moments before they die,” said lead researcher Wynn Jacobson-Galán. “Direct detection of pre-supernova activity in a red supergiant star has never been observed before in an ordinary Type II supernova. For the first time, we watched a red supergiant star explode!”
Up until now, all the red supergiants observed before they exploded had spent their last months being quite sedate. We’d seen no evidence of violent stellar behavior at the end of their lifetimes. But this star had a grace note, a light show observed before its grand finale. That’s what makes it so remarkable — and it’s also how the YSE team detected the impending explosion.

The YSE researchers made the first observations of the star’s increasing brightness about 130 days before the star eventually exploded. Using the PAN-STARRS optical telescopes, they also recorded evidence that the star had begun to eject its outer layers. Its death throes had begun. Thus forewarned, they tuned in using the LRIS, DEIMOS, and NIRES spectrographs at the Keck Observatory. Consequently, we now have detailed broad-spectrum measurements of a type II supernova from beginning to end.
This supernova, named “SN 2020tlf,” is a great demonstration of how the end of a red supergiant’s life can be a spectacular light show. These stars really do go out with a bang. Some go through a series of color changes, as the star’s internal fusion engine produces heavier and heavier elements. Many spend a period as Cepheid variable stars, whose repeating flash is so regular that it is sometimes used in astronomy as a “standard candle.” Before finally exploding in a supernova, the most luminous red supergiants are even believed to evolve into Wolf-Rayet stars — a rare stellar super-inferno that burns hotter than almost any other known type of star, with a roaring stellar wind.
SN 2020tlf, however, may fall into a unique weight class. Its progenitor star was somewhere between ten and twelve solar masses. For progenitor stars between ten and twenty solar masses, after a core-collapse supernova, what remains is a neutron star. But if that neutron star is massive enough, even neutron degeneracy pressure can’t stop the star’s continued gravitational collapse. A neutron star of more than about two solar masses may collapse yet again, forming a black hole.
Subscribe Today to get the latest ExtremeTech news delivered right to your inbox.
© 1996-2022 Ziff Davis, LLC. PCMag Digital Group
ExtremeTech is among the federally registered trademarks of Ziff Davis, LLC and may not be used by third parties without explicit permission.
We strongly encourage you to read our updated PRIVACY POLICY and COOKIE POLICY.

Previous Apple Delaying its AR/VR Until 2023
Next Ripple Effect for AMD, Intel, And Nvidia