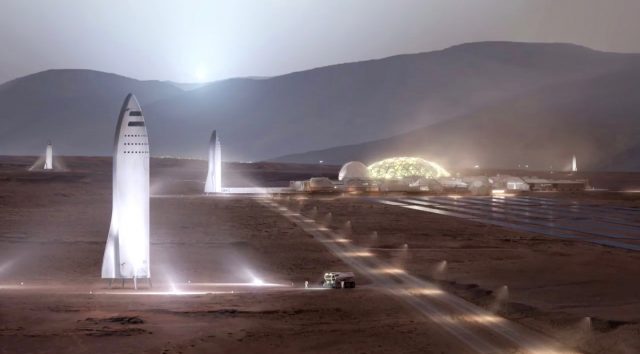 Humans walked on the moon half a century ago, and it looks like we’re heading back. NASA aims to send astronauts to the lunar surface in the coming decade with the Space Launch System (SLS) and SpaceX Starship HLS, but SpaceX’s Elon Musk has his sights set on a more distant target: Mars. He’s floated some very pie-in-the-sky timelines for sending people to Mars, but now he’s doubling down. In a recent interview, Musk said SpaceX will land the first humans on Mars in ten years, and that’s a worst-case scenario. It could be half as long if everything goes perfectly during upcoming Starship tests.
Musk made this prediction on an episode of the Lex Fridman Podcast. The full conversation, which you can see below, is more than two and a half hours long. In it, the pair discuss Tesla self-driving technology, neural networks, memes, and of course, SpaceX. The conversation about Mars starts at around the 27-minute mark.
In the past, Musk has speculated that colonization efforts could begin this decade, featuring a fleet of Starships that congregate in Earth orbit before heading off to Mars when the planets pass each other. Musk has backed off from that level of detail as Starship takes shape. While the vehicle has accomplished some truly impressive things, it’s hard to see how it could be sending dozens of people to the red planet inside of a decade when it has yet to even reach orbit. When asked about the timeline on the podcast, Musk responded with a very pregnant pause. About 20 seconds later he answered that ten years was the outside range. The best-case, he said, was a mere five years.

Currently, NASA hopes to land Artemis 3 on the moon in 2025, but that timeline is looking suspect due to delays with the SLS and updated spacesuits. SpaceX is also just in the early stages of designing the Starship variant that will land the crew on the lunar surface. If those issues result in another Artemis delay, Musk’s proposed timeline could put people on Mars before the moon. That seems like a long shot, but it would be an incredible accomplishment and an indictment of traditional government contractors if it comes to pass.
Getting Starship to Mars is primarily an engineering problem. The goal with this vehicle is to lower the cost per ton of reaching Mars to the point where a human presence is feasible. According to Musk, no amount of money will get you to Mars right now. In the past, Musk has cited 2026 as the year he believes SpaceX will land its first Martian astronauts, but a lot of things could go wrong between now and then. Starship still needs a lot of work, and the first-stage Super Heavy booster has yet to fly at all. Whether or not Musk is right about reaching Mars in five years, SpaceX is in the best position to give it a shot.
Now Read:
Subscribe Today to get the latest ExtremeTech news delivered right to your inbox.
© 1996-2022 Ziff Davis, LLC. PCMag Digital Group
ExtremeTech is among the federally registered trademarks of Ziff Davis, LLC and may not be used by third parties without explicit permission.
We strongly encourage you to read our updated PRIVACY POLICY and COOKIE POLICY.