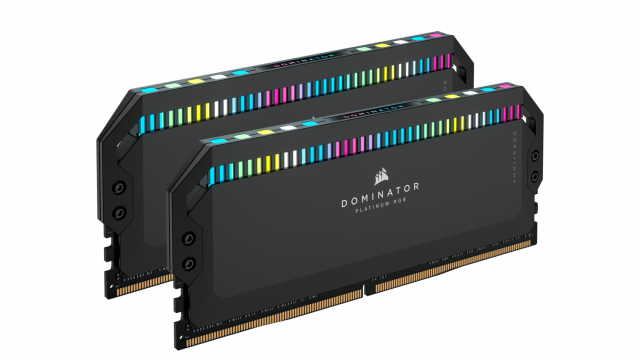 If you were considering upgrading your gaming rig to Intel’s new Alder Lake platform, and dropping in some DDR5 memory modules, memory manufacturer Micron has some bad news for you. The company confirmed in an earnings call recently that production of the next-gen memory modules is quite difficult at this time due to a shortage of required components, and the situation isn’t going to improve until the middle of next year, probably.
For the uninitiated, Alder Lake is the first PC platform that supports DDR5 memory, which will eventually replace the DDR4 memory that we all use now. Compared to its predecessor, DDR5 is better in almost every way, offering more memory bandwidth, increased memory density per module, and higher clock speeds. We say “almost” because you can actually buy DDR4 RAM right now, whereas DDR5 sticks are only being sold at scalper prices currently.
The current scalper rate for a pair of DDR5 sticks.
On the call, which was transcribed by Seeking Alpha, Micron CEO Sanjay Mehrotra explained the problem quite succinctly. “Across the PC industry, demand for DDR5 products is significantly exceeding supply due to non-memory component shortages impacting memory suppliers’ ability to build DDR5 modules.” Looking ahead a bit, he added, “We expect these shortages to moderate through 2022, enabling bit shipments of DDR5 to grow to meaningful levels in the second half of calendar 2022.” The “non-memory component shortages” he’s talking about are reportedly VRMs and power management circuits (PMIC), according to Tom’s Hardware. In a cruel twist of fate, both of these components were found on the motherboard previously, but for DDR5 they have been moved onto the modules themselves for better voltage regulation. This means Micron has plenty of memory lying around, but not enough of the other parts it needs to create DDR5 sticks for customers.
Compounding the problem even further is there is only one manufacturer of PMICs that is validated by Intel for use on its platform. And if even that wasn’t bad enough, the website 12chip reports that DDR5 PMIC chips cost roughly ten times what chips for DDR4 platforms cost, and they also take up to 35 weeks to procure.
All of this is a long way of saying, if you want to upgrade to Alder Lake, just go with DDR4 memory. It could take years for the supply problems to resolve, and even if supply catches up to demand at some point in the distant future, DDR5 will still be much more expensive than DDR4 simply because it’s a more advanced version of system memory, and this is the normal situation when a new memory type is introduced.
Now Read:
Subscribe Today to get the latest ExtremeTech news delivered right to your inbox.
© 1996-2021 Ziff Davis, LLC. PCMag Digital Group
ExtremeTech is among the federally registered trademarks of Ziff Davis, LLC and may not be used by third parties without explicit permission.
We strongly encourage you to read our updated PRIVACY POLICY and COOKIE POLICY.