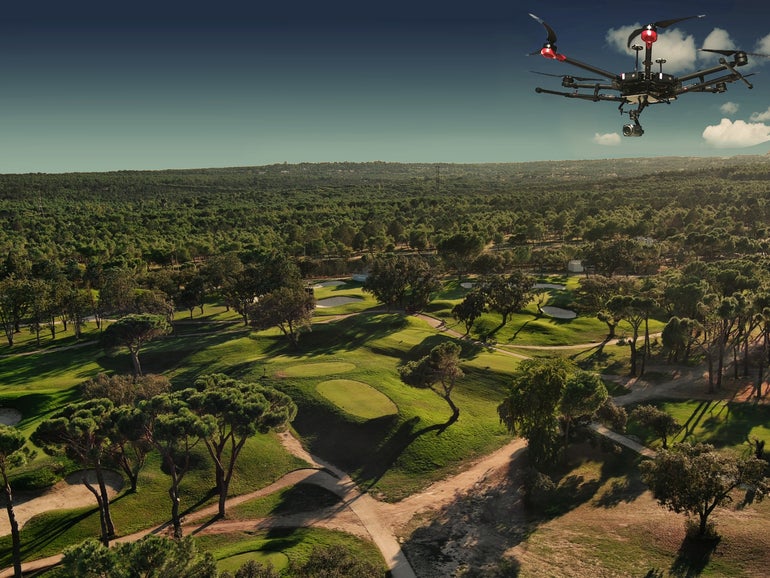 A 5G-enabled drone flying over the course at the recent Open de España in Madrid.

Drones, digital twins and virtual reality applications aren’t the kinds of kit you’d normally associate with golf, but that’s exactly the tools that are being put to test right now on the sport’s European Tour.

At the recent Open de España in Madrid, Michael Cole, CTO of the European Tour and Ryder Cup, and his team worked alongside telecommunications giant Telefónica to test how drones might be used to provide better footage and improve the quality of TV broadcasting. They tested a tethered and a roaming drone, and both were connected through 5G.

“Embedding that into our backend processes was part of the use case that we were testing,” says Cole. “We wanted to look at how we could introduce the end-to-end capability from drones into our work processes and our workflow for production techniques.”

They created a full-scale representation of play from other holes on the scoreboard at the 18th green. This digital animation displayed ball strikes, ball positions and player-to-player comparisons. Cole says this animation allows spectators to see what’s happening around the course and he’s keen to explore how it might be expanded by working with other technology companies.

“This was a proof of concept, so we worked with our developers. But obviously we want to work with other technology partners to further that concept in the future,” he says.

In fact, the European Tour’s on-course innovations aren’t limited to drones and virtual reality. Cole says his organisation is working with partners across a range of pioneering digital areas including big data and mobility.

Picture an innovation lab and you’re unlikely to think of the slow-paced greens of golf, but that’s exactly where increasing numbers of IT firms are going to test their new technologies.

Cole believes these innovative proof of concepts are creating big benefits for the sport’s players and fans, but also provide a showcase for the potential application of digital technology in other sectors.

“We are the ultimate innovation platform for organisations to work with in a collaborative way and they can use our platform for trialling new technologies,” he says to ZDNet.

Analyst Gartner says an innovation lab can boost digital transformation initiatives by streamlining the process from idea generation to implementation – and it says the lab is an ideal place to engage with external technology partners.

Cole says the way that the European Tour is set up and played makes it the perfect testing ground for digital innovation.

Each of the tour’s 40-plus events across 31 countries annually takes place across a short timeframe. Cole says the tech setup at each of these venues is like a temporary smart city, where connectivity, cloud-based services and sensors are crucial to operational activities.

Proof of concepts can be brought to these temporary tech-enabled fields of play, set up, run, and then either scaled up or down quickly.

Cole: “We are the ultimate innovation platform.”

Add in golf’s huge global audience, and the 700,000 data points that Cole and his colleagues collect from players at each tournament – and the result is a sport that has become the go-to place to test new ideas.

“We can test capabilities for four days at a golf tournament in a very demonstrable manner,” he says. “What’s more, I think there are key learnings that we can share pan-industry because we can showcase emerging technologies in a way that becomes very real and very authentic.”

Blue-chip tech partners, such as Tata, Zoom, Capgemini and others, are already helping the European Tour to test its innovative ideas. Cole expects other companies to join them soon.

“We have more technology partners on board than we ever have in our history, and possibly more than any other sports-rights holder – and there are more to come, which demonstrates the change in reputation of the critical role that technology plays in golf,” he says.

Rather than being seen as a service to the business, as it was in the past, technology is now seen as a potential generator of cash.

“Traditionally, everyone viewed the technology department as a cost centre. It was all about overhead; it was all about cost. Now, I run a P&L – and we are creating value for the organisation,” he says.

Cole says the key to value generation is being able to make the most of the huge amount of data his IT organisation collects.

“We’re now collecting over seven times the amount of data that we did previously. That might not sound a great deal, but that’s every stroke by every player in real time. And that’s a real step forward for us in terms of our evolution.”

Mobile technology is very much front of mind when it comes to delivering new data-led services to the sport’s key stakeholders, says Cole.

By drawing real-time insight on player performance and serving it to fans around the course quickly via mobile devices, the IT team can help to boost the quality of customer experiences.

Cole says the shift towards data-led mobility is a big change in the sport from even a couple of years ago, when he last spoke to ZDNet.

So, the European Tour is working with IT companies to test new ideas in a range of emerging areas. It’s a similar story at The R&A, which is golf’s governing body as well as the organiser of The Open.

CTO Steve Otto says his organisation is working closely with technology partner NTT Data to explore how innovation can help improve the governance, administration and operational activities of the sport.

“Technology is endemic to the whole way that golf is played,” he says. “We’re continually looking to get more and more from data and how its role in the sport is evolving. In terms of where the game’s going next, I think it’s just about creating more and more knowledge.”

Back at the European Tour, Cole’s team continues to explore a range of other technologies, including cloud-based services, 5G connectivity to boost operational efficiency, and the use of the Internet of Things and sensors to monitor and manage on-course conditions, such as weather conditions and sanitising stations.

The overarching message is simple – there’s more innovation to come: “We have to continue to look at things holistically. Technology is moving so fast that it’s very difficult to predict anything with certainty,” he says.