Historical and ethnographic literature from across Africa suggests bee products, honey and larvae, had considerable importance both as a food source and in the making of honey-based drinks. To investigate this, a team of researchers from the University of Bristol and Goethe University analyzed lipid residues from 458 prehistoric pottery vessels of the Nok culture, Nigeria, West Africa, an area where early farmers and foragers co-existed.

Today, honeybees are an integral part of socio-ecological landscapes and beekeeping plays an important global economic role with around 1.6 million tons of honey being produced annually.

Wild honey is also known to be widely collected by foragers globally, except in environments such as the Arctic and Subarctic where bees do not survive.

However, evidence for ancient human exploitation of the honeybee is rare, saved in Paleolithic rock art depicting bees and honey, found in Spain, India, Australia and Southern Africa, spanning the period 40,000-8,000 years ago.

The majority of prehistoric rock art, with over 4,000 sites portraying bees, honeycombs and honey-collecting, is located in Africa, at Didima Gorge in Namibia and other locations.

Furthermore, the archaeology of honey-collecting is largely invisible, in contrast to the, often excellent, survival of other organic materials such as animal bones or plant remains.

Recently, lipid residue analysis identified evidence for the presence of beeswax in prehistoric pottery vessels from across Neolithic Europe, the Near East and Mediterranean North Africa, providing evidence for human exploitation of the honeybee from at least the 7th millennium BCE.

However, little is known of its importance in other areas globally, for example, in the subsistence of hunter-gatherer groups and early farming communities in West Africa, a vast geographic area extending from the Atlantic Ocean in the west, and south to Cameroon.

One of the most well-known cultures in prehistoric West Africa is the Nigerian Nok culture, which spans a period of around 1,500 years, beginning around the middle of the 2nd millennium BCE.

The Nok culture is characterized by its remarkable terracotta figurines, which constitute the earliest large-sized figurative art objects in Africa outside Egypt and early evidence for iron production in West Africa, ca. 1st millennium BCE.

In new research, Dr. Julie Dunne from the University of Bristol and colleagues performed organic residue analysis on a total of 458 potsherds from 12 archaeological sites in Central Nigeria, covering the Early, Middle and Late Nok periods.

To their great surprise, the scientists revealed that around one third of the pottery vessels used by the ancient Nok people were used to process or store beeswax.

The presence of beeswax in ancient pottery is identified through a complex series of lipids, the fats, oils and waxes of the natural world.

The beeswax is probably present as a consequence either of the processing (melting) of wax combs through gentle heating, leading to its absorption within the vessel walls, or, alternatively, beeswax is assumed to act as a proxy for the cooking or storage of honey itself.

“This is a remarkable example of how biomolecular information extracted from prehistoric pottery, combined with ethnographic data, has provided the first insights into ancient honey hunting in West Africa, 3,500 years ago,” Dr. Dunne said.

“We originally started the study of chemical residues in pottery sherds because of the lack of animal bones at Nok sites, hoping to find evidence for meat processing in the pots,” said Professor Peter Breunig, a researcher at Goethe University.

“That the Nok people exploited honey 3,500 years ago, was completely unexpected and is unique in West African prehistory.”

A paper on the findings was published in the journal Nature Communications. 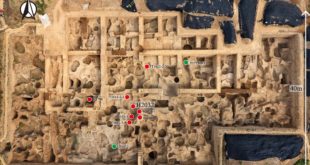 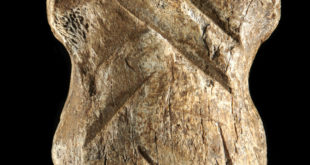 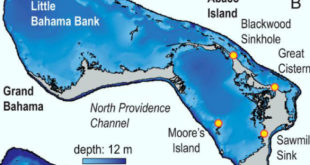 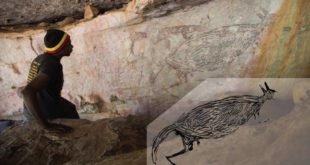 A 2-m- (6.6-foot) long painting of a kangaroo in a rock shelter in the north-eastern Kimberley …