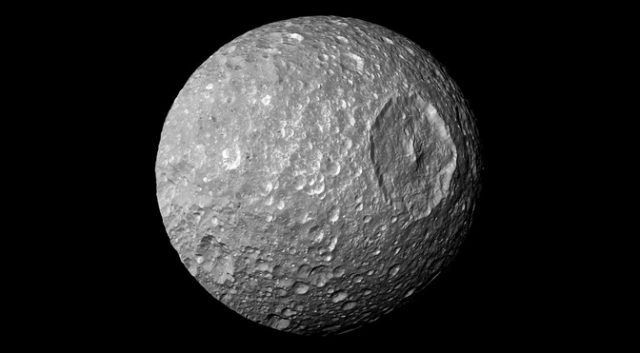 On Earth, water is the key to all life, but there doesn’t seem to be much of it on other planets… at least at first glance. As we explore more of our solar system, water has been appearing in some surprising places. We now know Mars is not entirely bone dry, and the moon has deposits of water ice. There are even worlds like Europa and Enceladus where there is most likely a subsurface ocean. Researchers from the Southwest Research Institute (SwRI) set out to prove that Saturn’s innermost moon Mimas didn’t have any water. Instead, they found evidence that it has a “stealth” subsurface ocean.
You might not know Mimas by name, but you’ve probably seen pictures — it’s the one that looks shockingly like the Death Star with a giant impact crater standing in for the battle station’s planet-destroying laser. That might become the least interesting thing about the planet if the SwRI team can confirm this watery finding.
Keen followers of space news will undoubtedly note that we don’t have any active space probes in the Saturnian system. We did until a few years ago, though. The SwRI team made its observations in the last days of Cassini’s revolutionary exploration of Saturn and its moons. That probe dove into Saturn’s atmosphere in 2017. Before that, the team took readings to verify the general consensus that Mimas was a frozen block of ice. Instead, they found wobbles or “librations” that suggest there’s water sloshing around in there.
Quadruple Saturn Moon Transit: Hubble snapped this pic of four of Saturn’s moons (Titan, Mimas, Dione, and Enceladus) transiting the planetary disk in 2009.
If this finding is confirmed, Mimas could become the first member of a new class of worlds, the “stealth ocean worlds.” Moons like Europa and Enceladus have always been suspect because of their fractured surfaces and water plumes, but Mimas is heavily cratered with no evidence of surface remodeling.
The team believes tidal heating from Saturn is keeping the internal ocean liquid. It’s the same for nearby Enceladus, but Mimas doesn’t show surface evidence. The team ran models of tidal heating, finding that Mimas could maintain a liquid interior with no surface cracking as long as the ice shell is between 14 to 20 miles thick.
Water is essential for life as we know it, which is why scientists are so keen to find out if there’s something alive under the ice of Europa in orbit of Jupiter. There have been numerous concepts for surface missions, and the orbital Europa Clipper will launch in a few years. It might take another spacecraft in the Saturnian system to verify the existence of a liquid ocean, but it’s worth looking into. Finding water in Mimas could vastly expand the potential niches for life in the universe.
Now Read:
Subscribe Today to get the latest ExtremeTech news delivered right to your inbox.
© 1996-2022 Ziff Davis, LLC. PCMag Digital Group
ExtremeTech is among the federally registered trademarks of Ziff Davis, LLC and may not be used by third parties without explicit permission.
We strongly encourage you to read our updated PRIVACY POLICY and COOKIE POLICY.

Previous Better Space Food For NASA
Next That Lake At Mars