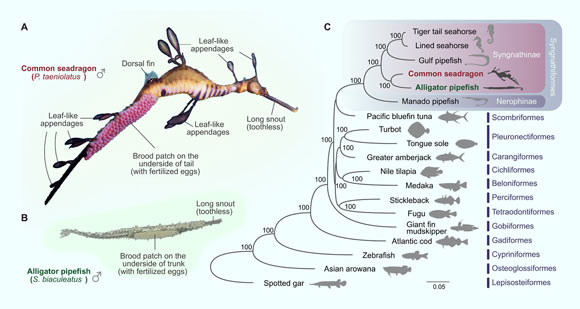 A team of researchers from Germany, China, Singapore, Belgium, and Japan has successfully sequenced and analyzed male and female genomes of the common seadragon (Phyllopteryx taeniolatus) and the alligator pipefish (Syngnathoides biaculeatus).
Key features of the common seadragon (Phyllopteryx taeniolatus) and the alligator pipefish (Syngnathoides biaculeatus) and their phylogenetic positions: (A) the common seadragon has a dragon-shaped body with many special leaf-like appendages and long tubular snout lacking teeth; common seadragon males incubate eggs on a brood patch on the underside of the tail; (B) a male alligator pipefish showing eggs incubated on a brood patch on the underside of trunk; (C) phylogenetic tree of 19 ray-finned fishes. Image credit: Qu et al., doi: 10.1126/sciadv.abg5196.
“Seadragons are members of the family Syngnathidae that also includes the more derived seahorses and pipefishes,” said University of Konstanz evolutionary biologist Axel Meyer and his colleagues.
“They are fascinating animals because of their dragon-shaped body with special leaf-like appendages and spectacular coloration.”
“They are considered to be ‘masters of camouflage’ as they can deceive predators by changing their color pattern to resemble and blend with kelp and other seaweed.”
“Like other syngnathids, seadragons have specialized morphological traits such as a tube-like toothless mouth, the absence of pelvic fins and scales, a bony armor covering the body, and ‘male pregnancy’.”
“Males of all syngnathids incubate the fertilized eggs on a specialized incubation area, and in the modern lineages, even in enclosed brood pouches, making them prime examples for sex-role reversal.”
To understand the molecular basis of the evolutionary novelties of seadragons, the researchers generated and analyzed high-quality, chromosome-level genome assemblies of male and female individuals of the common seadragon, an unusual fish species also known as the weedy seadragon.
“We showed that a series of genes is responsible for an evolutionary novelty, the leaf-like appendages, that usually control fin development,” they said.
“The leaf-like skin appendages of the seadragons are thus highly altered fin rays.”
The genome analysis shows that in the seahorse relatives, several genes that contribute to the development of teeth in other fishes as well as in humans are missing.
“We tested the hypothesis about the corresponding scpp5 gene by switching off this gene in zebra fish, a well-researched model organism with pharyngeal teeth,” the scientists said.
“As expected, the mutated fish displayed reduced teeth. The function of the missing gene responsible for tooth loss was thus proven in molecular-biological CRISPR-Cas experiments.”
“We also found the molecular basis for sex-determination in seadragons to be in the Mullerian hormone, as had previously also been documented for seahorses,” they added.
In the same study, the authors generated a chromosome-scale, genome assembly for the alligator pipefish, the closely related species of the common seadragon.
Their results appear in the journal Science Advances.
_____
Meng Qu et al. 2021. Seadragon genome analysis provides insights into its phenotype and sex determination locus. Science Advances 7 (34): eabg5196; doi: 10.1126/sciadv.abg5196