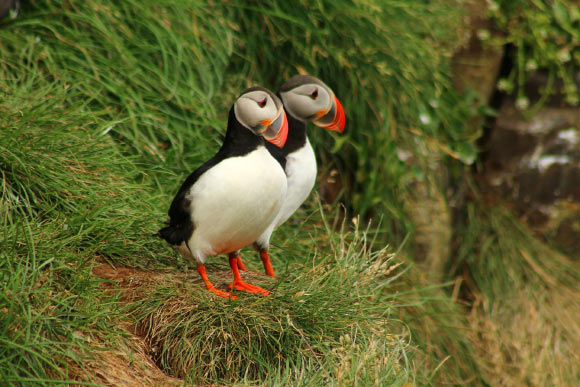 Researchers have sequenced analyzed the genome of the Atlantic puffin (Fratercula arctica), a small auk with a large head and a colorful bill. Using the genome-wide resequencing data, they’ve also identified four main puffin population clusters consisting of (i) Spitsbergen (High Arctic), (ii) Canada, (iii) Isle of May, and (iv) multiple colonies in Iceland, the Faroe Islands, and Norway.
A pair of Atlantic puffins (Fratercula arctica). Image credit: Mali Ancor.
Atlantic puffins are iconic seabirds, prevalent in popular culture, important for tourism, and inherently valuable for the marine ecosystem.
They were historically widely harvested for their meat and down and exploitation remains an important cultural tradition in Iceland and the Faroe Islands.
Their breeding range stretches from the Arctic coast and islands of Norway, Greenland, and Canada, southward to France and the United States.
Puffins have been designated as Vulnerable to extinction globally and listed as Endangered in Europe.
Notably, the once world’s largest puffin colony in Røst, Norway has experienced complete fledging failure during nine of the last 13 seasons and has lost nearly 80% of its breeding pairs during the last forty years.
Similarly, Icelandic and Faroese puffins have experienced low productivity and negative population growth since 2003.
“Previously, it has been assumed that puffins can be divided into three subgroups according to geographical distribution and size,” said senior author Dr. Sanne Boessenkool, a researcher in the Centre for Ecological and Evolutionary Synthesis at the University of Oslo, and colleagues.
“It has also been assumed that the genetical variation is evenly distributed among the different colonies. This assumption was based on analyses of smaller parts of the genetic material.”
“Yet, we wanted to investigate if this assumption was true,” they added.
In the study, the researchers sequenced the genomes of 72 individuals from 12 Atlantic puffin colonies.
“The genetical studies show that there are at least four subgroups or groups of colonies,” said lead author Dr. Oliver Kersten, also from the Centre for Ecological and Evolutionary Synthesis at the University of Oslo.
“One of the subgroups are the largest puffins, which only exist in the Arctic part of the world. One of the other groups is locatedonthe west coast of Canada and the United States.”
When the authors looked at the whole genome of the Atlantic puffin, they were able to identify substantial differences between the populations.
“This study shows the importance of doing whole genome sequencing to reveal the distribution of genetic diversity,” they said.
The results were published in the journal Communications Biology.
_____
O. Kersten et al. 2021. Complex population structure of the Atlantic puffin revealed by whole genome analyses. Commun Biol 4, 922; doi: 10.1038/s42003-021-02415-4

Previous Spaceflight Directorate
Next Laws of Physics on Mars 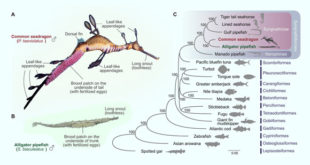