A team of researchers has discovered a new species of salamander living in Alabama and the Panhandle region of Florida, the United States.

The newly-discovered salamander species belongs to Sirenidae (sirens), a family of completely aquatic, eel-like salamanders with an unusual morphology: large external gills and only front limbs.

The ancestors of these amphibians likely branched off from all other salamanders early in the evolution of this group.

Although sirens ranged through North America, South America, and Africa during the Cretaceous period, the family is now largely restricted to the southern United States and northeastern Mexico, where they have been present since the late Eocene epoch.

Named the reticulated siren (Siren reticulata), the new species lives in the vulnerable biodiversity hotspot of southern Alabama and northwestern Florida and is the first new species of siren to be described in 44 years.

“To date this species is only confirmed from three localities,” Sul Ross State University’s Dr. Sean Graham and co-authors.

“The type locality is a shallow freshwater marsh associated with Lake Jackson, a large freshwater limesink lake that straddles the border between Florida and Alabama, near the town of Florala, Alabama.”

“The second site is a beaver-impounded clearwater stream and associated bay swamp on Eglin Air Force Base, Okaloosa County, Florida.”

The reticulated siren is genetically distinct from all currently-recognized species and subspecies of sirens.

This amphibian is very large (maximum known size nearly 24 inches, or 60 cm), making it among the largest vertebrates described from the United States in over 100 years.

“It was thrilling to be a part of this discovery team,” Dr. Graham said.

“Not only did we get to meet such an interesting new species, but we got another reminder that the book of life still has a lot of pages for us to fill.”

A detailed description of the reticulated siren appears in the December 5, 2018 online edition of the journal PLoS ONE. 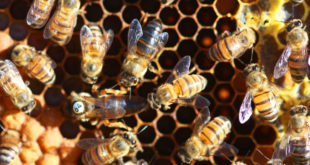