An international team of archaeologists and entomologists has discovered and examined an ancient arthropod-like petroglyph at the Teymareh rock art site in central Iran.

The motif of a six-legged creature with raptorial forearms was found on a 30-degree sloped boulder in the vicinity of Sarkubeh village in the Teymareh region of Iran’s Markazi province during surveys in 2017-2018.

In order to identify the depicted organism, a team of researchers from Iran and Taiwan used taxonomic methods.

In particular, they analyzed morphological characters and compared the petroglyph to arthropods known to be distributed in the Teymareh region and their behavioral characteristics.

The motif was also compared with ancient anthropomorphs and anthropomorphized animal images in Iran and other countries to find possible similarities.

“The six limbs suggest an insect, while the triangular head with big eyes and the grasping forearms are unmistakably those of a praying mantid, a predatory insect that hunts and captures prey like flies, bees and even small birds,” the scientists said.

“An extension on its head even helps narrow the identification to a particular genus of mantids in this region, Empusa.”

“Even more mysterious are the middle limbs, which end in loops or circles. The closest parallel to this in archaeology is the Squatter Man, a petroglyph figure found around the world depicting a person flanked by circles.”

“One can only guess why prehistoric people felt the need to carve a mantis-man into rock, but the petroglyph suggests humans have linked mantids to the supernatural since ancient times,” they said.

“The carving bears witness that in prehistory, almost as today, praying mantids were animals of mysticism and appreciation.”

The findings are published in the Journal of Orthoptera Research. 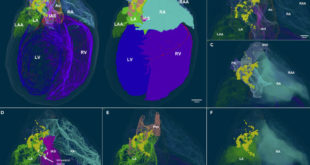