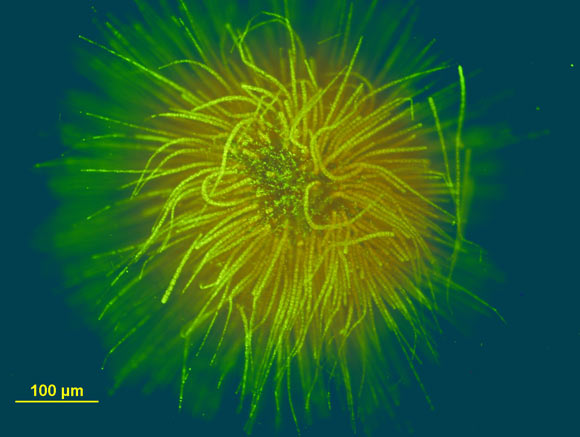 Using a new gene-analyzing technique, researchers from MIT and elsewhere have found that all extant species of cyanobacteria can be traced back to a common ancestor that evolved around 2.9 billion years ago. They’ve also found that the ancestors of cyanobacteria branched off from other bacteria around 3.4 billion years ago, with oxygenic photosynthesis likely evolving during the intervening 500 million years, during the Archean Eon. This estimate places the appearance of oxygenic photosynthesis at least 400 million years before the Great Oxidation Event, a period in which the Earth’s atmosphere and oceans first experienced a rise in oxygen.
Gloeotrichia echinulata, a colonial species of cyanobacteria. Image credit: Barry Rosen, U.S. Geological Survey.
“In evolution, things always start small,” said Dr. Greg Fournier, a researcher in the Department of Earth, Atmospheric and Planetary Sciences at MIT.
“Even though there’s evidence for early oxygenic photosynthesis — which is the single most important and really amazing evolutionary innovation on Earth — it still took hundreds of millions of years for it to take off.”
To precisely date the origin of cyanobacteria and oxygenic photosynthesis, Dr. Fournier and colleagues paired molecular clock dating with horizontal gene transfer, an independent method that doesn’t rely entirely on fossils or rate assumptions.
Normally, an organism inherits a gene vertically, when it is passed down from the organism’s parent.
In rare instances, a gene can also jump from one species to another, distantly related species. For instance, one cell may eat another, and in the process incorporate some new genes into its genome.
When such a horizontal gene transfer history is found, it’s clear that the group of organisms that acquired the gene is evolutionarily younger than the group from which the gene originated.
The researchers reasoned that such instances could be used to determine the relative ages between certain bacterial groups. The ages for these groups could then be compared with the ages that various molecular clock models predict.
The model that comes closest would likely be the most accurate, and could then be used to precisely estimate the age of other bacterial species — specifically, cyanobacteria.
Following this reasoning, the scientists looked for instances of horizontal gene transfer across the genomes of thousands of bacterial species, including cyanobacteria.
They also used new cultures of modern cyanobacteria to more precisely use fossil cyanobacteria as calibrations.
As a result, they identified 34 clear instances of horizontal gene transfer.
They then found that one out of six molecular clock models consistently matched the relative ages identified in the team’s horizontal gene transfer analysis.
The team ran this model to estimate the age of the crown group of cyanobacteria, which encompasses all the species living today and known to exhibit oxygenic photosynthesis.
The authors found that, during the Archean Eon, the crown group originated around 2.9 billion years ago, while cyanobacteria as a whole branched off from other bacteria around 3.4 billion years ago.
This strongly suggests that oxygenic photosynthesis was already happening 500 million years before the Great Oxidation Event, and that cyanobacteria were producing oxygen for quite a long time before it accumulated in the atmosphere.
The analysis also revealed that, shortly before the Great Oxidation Event, around 2.4 billion years ago, cyanobacteria experienced a burst of diversification.
This implies that a rapid expansion of cyanobacteria may have tipped the Earth into the Great Oxidation Event and launched oxygen into the atmosphere.
The team now plans to apply horizontal gene transfer beyond cyanobacteria to pin down the origins of other elusive species.
“This work shows that molecular clocks incorporating horizontal gene transfers promise to reliably provide the ages of groups across the entire tree of life, even for ancient microbes that have left no fossil record… something that was previously impossible,” Dr. Fournier said.
The results were published online this week in the Proceedings of the Royal Society B.
_____
G.P. Fournier et al. 2021. The Archean origin of oxygenic photosynthesis and extant cyanobacterial lineages. Proc. R. Soc. B 288 (1959): 20210675; doi: 10.1098/rspb.2021.0675

Previous One Million Years Ago
Next NASA Boeing Starliner 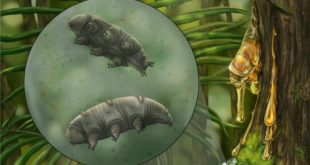 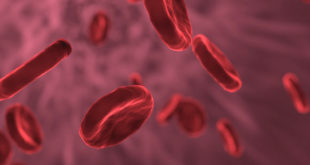 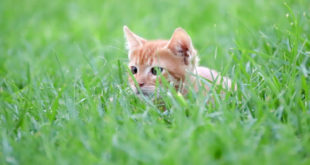 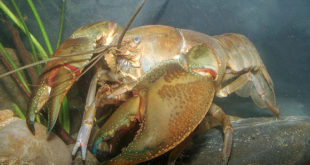