A team of researchers from the University of Oxford and IBM Research-Zürich has, for the first time, synthesized and characterized a ring of 18 carbon atoms.

Carbon, one of the most abundant elements in the Universe, is capable of forming many different forms (allotropes) due to its valency.

“While these are well studied forms of carbon, there are lesser known forms and one in particular has been elusive — cyclocarbons, where the carbon atoms have only two neighbors, arranged in the shape of a ring,” said first author Dr. Katharina Kaiser from IBM Research-Zürich and her colleagues.

“Discussed for many years, the structure of cyclocarbons was unknown, and two possibilities were debated, either with all the bonds in the ring of the same length (double bonds only) or with alternating shorter and longer bonds (alternating single and triple bonds).”

“Evidence for their existence was published in the gas phase, but due to their high reactivity, they could not be isolated and characterized — until now.”

The team’s approach was to generate cyclocarbon by atom manipulation on an inert surface at low temperatures — about 5 K (minus 450 degrees Fahrenheit, or minus 268 degrees Celsius) — and to investigate it with high-resolution atomic force microscopy.

“We triggered chemical reactions by applying voltage pulses with the tip of the atomic force microscope.”

“We found that such segments could be formed on a copper substrate covered by a very thin layer of table salt.”

“Because the salt layer is chemically very inert, the reactive molecules did not form covalent bonds to it.”

“After the successful creation of the linear carbon segments, we attempted to create cyclocarbon on the same surface.”

“To this end, we synthesized a precursor to cyclo[18]carbon that is a ring of 18 carbon atoms.”

The carbon oxide precursor, C24O6, has a triangular shape and in addition to the 18 carbon atoms it contains six carbon monoxide (CO) groups, increasing the stability of the molecule.

“Using voltage pulses applied to the tip of the atomic force microscope, we could remove pairs of CO-groups from the precursor. We identified intermediates with two and four CO-groups removed.”

Eventually, the team was also able to remove all six CO-groups and to form cyclo[18]carbon.

“Future applications are suggested by the fact that we could fuse cyclocarbons and/or cyclic carbonoxides by atom manipulation,” the authors said.

“Eventually, custom-made molecular structures might be used as elements for molecular electronics, based on single electron transfer.”

The study was published online this week in the journal Science. 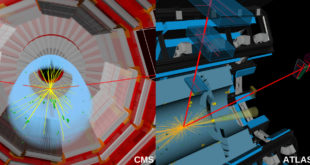