Paleontologists have examined the fossilized remains of a previously unknown species of eurypterid (sea scorpion) and found direct evidence that these marine creatures were able to breathe in subaerial environments through their main respiratory organs.

The new species, named Adelophthalmus pyrrhae, lived about 350 million years ago during the Carboniferous period.

It belongs to Eurypterida, a large group of extinct arthropods that thrived from the Ordovician through the Permian period.

Their closest living relatives are horseshoe crabs, which lay eggs on land but are unable to breathe above water.

The three-dimensionally preserved specimen of Adelophthalmus pyrrhae was found 25 years ago in the Lydiennes Formation in Montagne Noire region, France.

“We wondered if we could apply new technology to look into what was preserved of this specimen,” said Dr. James Lamsdell, a researcher in the Department of Geology and Geography at West Virginia University.

“I like the science and detective work that goes into research. And this was a cold case where we knew there was potential evidence.”

First, they noticed that each gill on the sea scorpion was composed of a series of plates.

But the back contained fewer plates than the front, prompting them to question how it could even breathe.

Then they zeroed in on trabeculae — pillars connecting the different plates of the gill, which are seen in modern scorpions and spiders.

“That props the gills apart so they don’t collapse when out of water,” Dr. Lamsdell said.

“It’s something that modern arachnids still have. Finding that was the final indication.”

“The reason we think they were coming onto land was to move between pools of water. They could also lay eggs in more sheltered, safer environments and migrate back into the open water.”

The discovery of air-breathing structures in Adelophthalmus pyrrhae indicates that terrestrial characteristics occurred in the arachnid stem lineage, suggesting that the ancestor of arachnids were semi-terrestrial.

The findings were published online this week in the journal Current Biology. 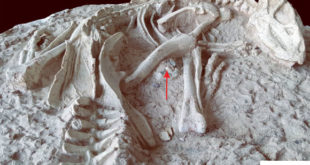 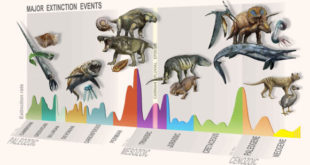 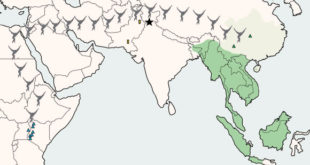 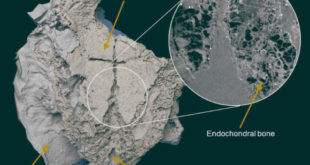 Paleontologists in Mongolia have found the fossilized remains of Minjinia turgenensis, a new genus and …