Archaeologists from Tel Aviv University, the Israel Antiquities Authority and the Geological Survey of Israel have excavated a Chalcolithic-period (5th millennium BCE) copper-smelting workshop at the site of Horvat Beter in Beer Sheva, southern Israel.

“The excavation revealed evidence for domestic production from the Chalcolithic period, about 6,500 years ago,” said Talia Abulafia, an archeologist at the Israel Antiquities Authority.

“The surprising finds include a small workshop for smelting copper with shards of a furnace — a small installation made of tin in which copper ore was smelted — as well as a lot of copper slag.”

Abulafia and colleagues unearthed multiple fragments of furnaces, crucibles and slag at the Horvat Beter site.

A lead isotope analysis indicated that the ore originated exclusively from Wadi Faynan, more than 100 km away.

“It’s important to understand that the refining of copper was the high-tech of that period,” said Professor Erez Ben-Yosef, an archaeologist in the Jacob M. Alkow Department of Archeology and Ancient Near Eastern Civilizations at Tel Aviv University.

“There was no technology more sophisticated than that in the whole of the ancient world.”

“Tossing lumps of ore into a fire will get you nowhere. You need certain knowledge for building special furnaces that can reach very high temperatures while maintaining low levels of oxygen.”

“The archeology of the land of Israel shows evidence of the Ghassulian culture,” he added.

“This culture was named for Tulaylât al-Ghassûl, the archeological site in Jordan where the culture was first identified.”

“The culture, which spanned the region from the Beer Sheva Valley to present-day southern Lebanon, was unusual for its artistic achievements and ritual objects, as evidenced by the copper objects discovered at Nahal Mishmar and now on display at the Israel Museum in Jerusalem.”

The people who lived in the area of the copper mines traded with members of the Ghassulian culture from Beer Sheva and sold them the ore, but they were themselves incapable of reproducing the technology.

Even among the Ghassulian settlements along Wadi Beer Sheva, copper was refined by experts in special workshops.

“At the beginning of the metallurgical revolution, the secret of metalworking was kept by guilds of experts,” Professor Ben-Yosef said.

“All over the world, we see metalworkers’ quarters within Chalcolithic settlements, like the neighborhood we found in Beer Sheva.”

“At the first stage of humankind’s copper production, crucibles rather than furnaces were used,” he added.

“This small pottery vessel, which looks like a flower pot, is made of clay. It was a type of charcoal-based mobile furnace.”

“Here, we show that the technology was based on real furnaces. This provides very early evidence for the use of furnaces in metallurgy and it raises the possibility that the furnace was invented in this region.”

The team’s paper appears in the October 2020 issue of the Journal of Archaeological Science: Reports. 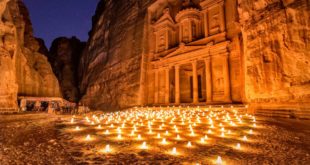 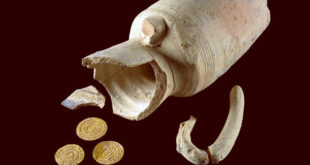 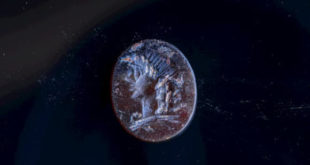 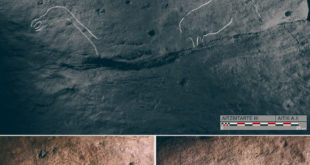 Archaeologists have discovered figures of animals, mainly bison, engraved in a Gravettian style in three …