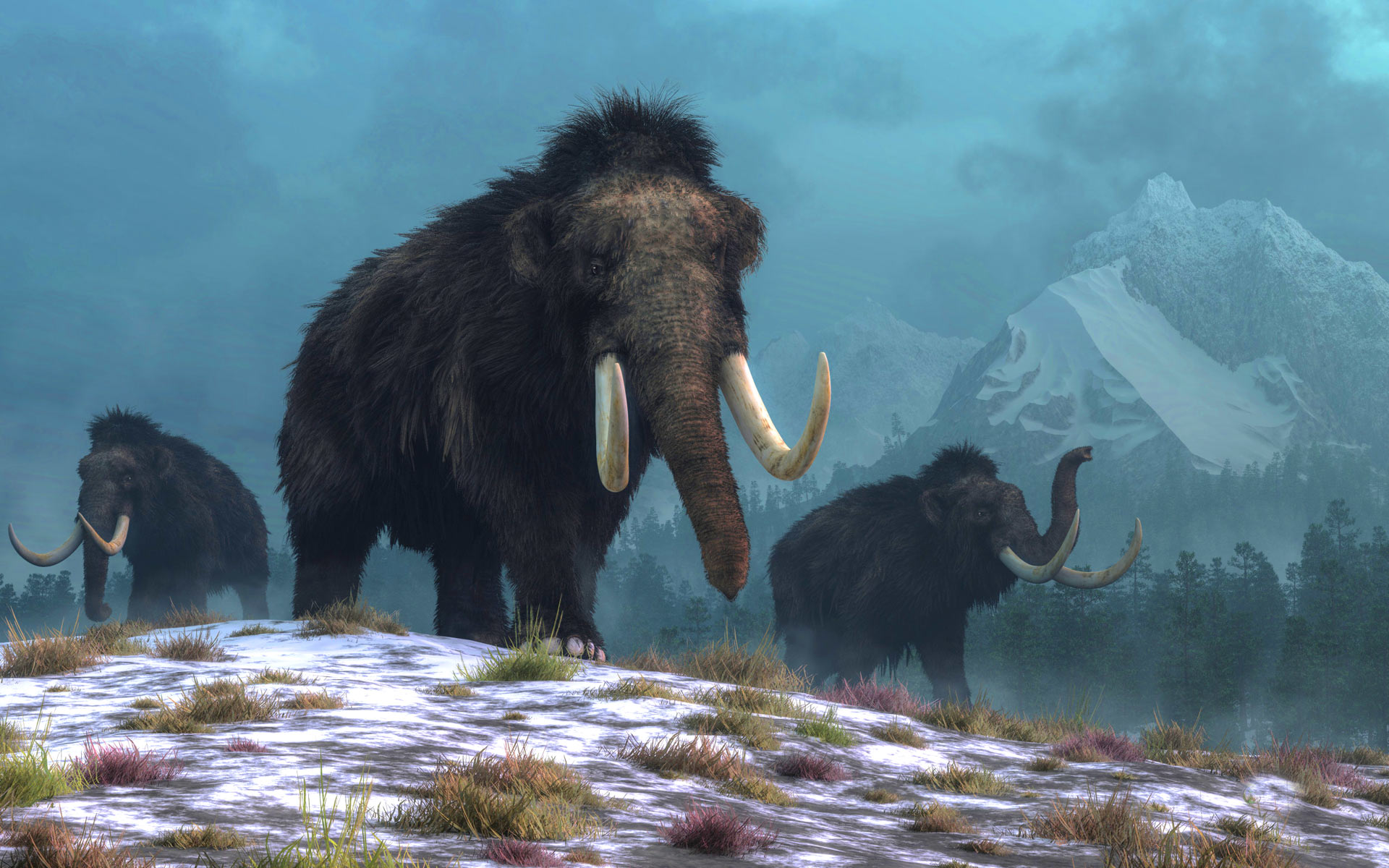 In a large-scale environmental DNA metagenomic study of ancient plant and mammal communities, an international team of researchers have analyzed 535 permafrost and lake sediment samples from across the Arctic spanning the past 50,000 years.
A trio of woolly mammoths (Mammuthus primigenius) trudges over snow covered hills; behind them, mountains with snow covered peaks rise above dark green forests of fir trees. Image credit: Daniel Eskridge.
“Scientists have argued for 100 years about why mammoths went extinct,” said Professor Eske Willerslev, a researcher at the University of Cambridge and director of the Lundbeck Foundation GeoGenetics Centre at the University of Copenhage.
“Humans have been blamed because the animals had survived for millions of years without climate change killing them off before, but when they lived alongside humans they didn’t last long and we were accused of hunting them to death.”
“We have finally been able to prove was that it was not just the climate changing that was the problem, but the speed of it.”
“They were not able to adapt quickly enough when the landscape dramatically transformed and their food became scarce.”
“As the climate warmed up, trees and wetland plants took over and replaced the mammoth’s grassland habitats.”
“And we should remember that there were a lot of animals around that were easier to hunt than a giant woolly mammoth (Mammuthus primigenius) — they could grow to the height of a double decker bus!”
Woolly mammoths and their ancestors lived on Earth for approximately 5 million years.
During this period, herds of these huge animals as well as reindeers and woolly rhinoceroses thrived in the cold and snowy conditions.
Despite the cold, a lot of vegetation grew to keep the various species of animals alive — grass, flowers, plants, and small shrubs would all have been eaten by the vegetarian mammoths who probably their tusks to shovel snow aside and are likely to have used their trunks to uproot tough grasses. They were so big because they needed huge stomachs to digest the grass.
Mammoths could travel a distance equivalent of going around the world twice during their lifetime and fossil records show they lived on all continents except Australia and South America.
Populations were known to have initially survived the end of the latest Ice Age in small pockets off the coasts of Siberia and Alaska — on Wrangel Island and St Paul Island — but the new research found they actually lived longer elsewhere too and the breeds of mammoths on both the islands were closely related despite being geographically separated.
The authors also sequenced the DNA of 1,500 Arctic plants for the very first time to be able to draw these globally significant conclusions.
“The most recent Ice Age ended 12,000 years ago when the glaciers began to melt and the roaming range of the herds of mammoths decreased,” said Dr. Yucheng Wang, a researcher in the Department of Zoology at the University of Cambridge.
“It was thought that mammoths began to go extinct then but we also found they actually survived beyond the Ice Age all in different regions of the Arctic and into the Holocene — the time that we are currently living in — far longer than scientists realised.”
“We zoomed into the intricate detail of the environmental DNA and mapped out the population spread of these mammals and show how it becomes smaller and smaller and their genetic diversity gets smaller and smaller too, which made it even harder for them to survive.”
“When the climate got wetter and the ice began to melt it led to the formation of lakes, rivers, and marshes.”
“The ecosystem changed and the biomass of the vegetation reduced and would not have been able to sustain the herds of mammoths.”
“We have shown that climate change, specifically precipitation, directly drives the change in the vegetation — humans had no impact on them at all based on our models.”
The team’s results appear today in the journal Nature.
_____
Y. Wang et al. Late Quaternary dynamics of Arctic biota from ancient environmental genomics. Nature, published October 20, 2021; doi: 10.1038/s41586-021-04016-x