Fasting Can Protect From Infections 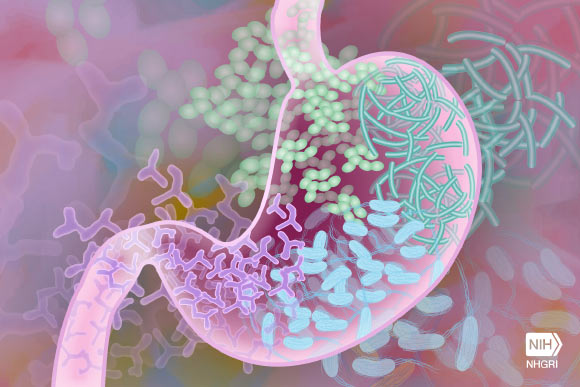 Fasting before and during exposure to invasive food-borne bacteria protects mice from developing a full-blown gastrointestinal infection, in part through the actions of the gut microbiome, according to new research led by University of British Columbia scientists.
Graef et al. highlight how food intake controls the complex relationship between host, pathogen and gut microbiota during an enteric infection. Image credit: Darryl Leja, National Human Genome Research Institute, National Institutes of Health.
“Most animals, including humans, lose their appetites when sick,” said Dr. Bruce Vallance, a researcher in the Department of Pediatrics at BC Children’s Hospital, the University of British Columbia, and his colleagues.
“Whether this sickness behavior has evolved as a protective mechanism is unclear.”
“In addition, fasting therapies have become popular in recent years and show promise for treating chronic inflammatory diseases, but it is uncertain whether fasting-induced immunosuppression could leave an already fasted host more vulnerable to infection than a fed host.”
“To test this, we fasted mice and orally infected them with the invasive bacterium Salmonella enterica serovar Typhimurium.”
In the study, mice were fasted for 48 hours before and during Salmonella enterica infection.
Fasting decreased the signs of bacterial infection compared to fed mice, including nearly eliminating all intestinal tissue damage and inflammation.
When fasted animals were re-fed for a day after their fast, there was a dramatic increase in Salmonella enterica numbers and invasion into the intestinal walls, although the associated inflammation was still attenuated compared to normal.
The results did not hold true when mice were exposed to Salmonella enterica intravenously instead of orally, and analyses of the microbiomes of mice showed significant changes associated with fasting and protection against infection.
Moreover, fasting did not fully protect germ-free mice — bred to lack a normal microbiome — from Salmonella enterica, suggesting that some of the protection was due to fasting’s effect on the microbiome.
Experiments using Campylobacter jejuni bacteria confirmed that the effect of fasting was not limited to Salmonella enterica, with similar results seen.
“These data suggest that therapeutic fasting or calorie restriction has the potential to beneficially modulate infectious and potentially non-infectious gastrointestinal diseases,” the researchers said.
“Our research highlights the important role that food plays in regulating interactions between the host, enteric pathogens and the gut microbiome.”
“When food is limited, the microbiome appears to sequester the nutrients that remain, preventing pathogens from acquiring the energy they need to infect the host.”
“While more research is needed, fasting or otherwise adjusting food intake could be exploited therapeutically to modulate infectious diseases in the future.”
The study was published online in the journal PLoS Pathogens.
_____
F.A. Graef et al. 2021. Fasting increases microbiome-based colonization resistance and reduces host inflammatory responses during an enteric bacterial infection. PLoS Pathog 17 (8): e1009719; doi: 10.1371/journal.ppat.1009719