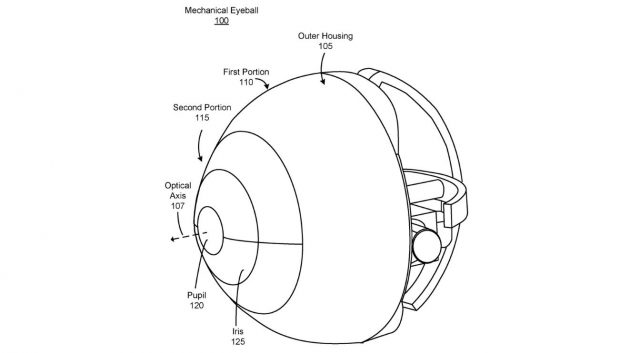 (Image: United States Patent and Trademark Office)Facebook (recently rebranded as Meta) has been granted a patent for a lifelike mechanical eye—a turn of events that can simultaneously be considered both unsettling and entirely unsurprising.
The patent, granted in December and first spotted by Insider, describes in great detail a robotic eye dubbed the “Two-Axis Mechanical Rotatable Eyeball.” The mechanical eye is set on two rotational axes that intersect at a center point and is powered by an external motor, which may or may not exist inside a creepy animatronic head.
The mechanical eye is eerily similar to a human eye both in volume and aesthetic design, which seems to be on purpose given Facebook’s intention to make the eye “appear authentic to an observer.” The patented blueprint reveals that the eye possesses an iris and a pupil, as well as an outer housing that contains parts that “represent” the human cornea and sclera. An image sensor hides behind the pupil, which can expand and contract at the whim of the iris (which, according to the patent, can be colored to resemble a human eye).
(Image: United States Patent and Trademark Office)
While Facebook hasn’t come out and said what it intends to use the mechanical eyeball for, context offers a few clues. The patent itself continuously mentions an animatronic device “configured to replicate a human or animal,” which may include skin “resembling human skin” that’s responsible for hiding mechanical components. This could be a reference to a tactile-sensing robot skin, or ReSkin, developed by Facebook in partnership with Carnegie Mellon University last year. “Skinterfaces” have been something of a research topic of late; researchers back in 2019 demonstrated a prototype that could be used to control a PC.

The patent also briefly discusses an animatronic eye tracking system as well as an artificial reality headset, the latter of which is speculated to involve the company’s upcoming Project Cambria VR headset. Facebook CEO Mark Zuckerberg has publicly stated Project Cambria will contain eye tracking capabilities that allow the user’s virtual avatar to match their eye movements and facial expressions in real time, which would allow this newfangled robotic eye to find its way into the AR/VR space. Similarly, Facebook showed off a haptic glove prototype last November that “mimics the feeling of handling real objects in the virtual world.” We have pretty good reason to believe these projects may be intertwined, given Facebook’s (er, Meta’s) recent commitment to building out a metaverse.
Now Read:
Subscribe Today to get the latest ExtremeTech news delivered right to your inbox.
© 1996-2022 Ziff Davis, LLC. PCMag Digital Group
ExtremeTech is among the federally registered trademarks of Ziff Davis, LLC and may not be used by third parties without explicit permission.
We strongly encourage you to read our updated PRIVACY POLICY and COOKIE POLICY.