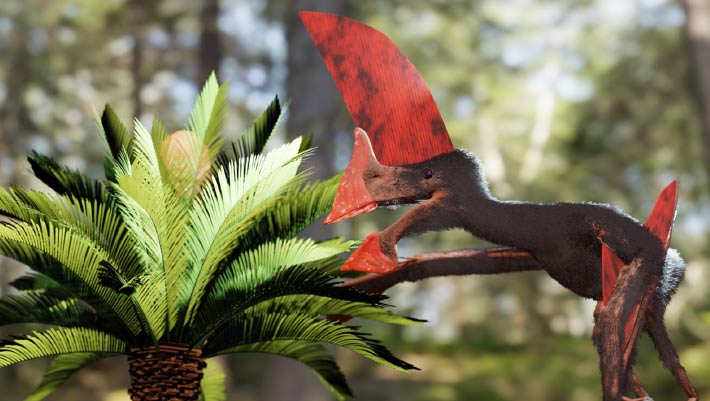 A nearly complete skeleton of a tapejarid pterosaur that lived during the Cretaceous period was intercepted during a police raid at Santos Harbour in the Brazilian state of São Paulo and confiscated together with several other exceptionally well-preserved fossils.
Living interpretative reconstruction of Tupandactylus navigans. Image credit: Beccari et al., doi: 10.1371/journal.pone.0254789.
“The pterosaur clade Tapejaridae was a major component of Early Cretaceous continental faunas, achieving a widespread distribution in Gondwana and Eurasia,” said Dr. Victor Beccari from the Universidade de São Paulo and the Universidade Nova de Lisboa and his colleagues.
“Tapejarids are characterized by their edentulous jaws and often huge cranial crests, and are sometimes inferred to have had an herbivorous diet.”
“In Brazil, tapejarids are among the most abundant and diverse pterosaur taxa, recovered from the Crato and Romualdo Lagerstätten (Araripe Basin, northeastern part of the country) and from the desertic environments of the Goiô-Erê Formation (Paraná Basin, southern Brazil).”
The newly-described specimen was recovered from the Early Cretaceous Crato Formation of Brazil.
It belongs to a species of tapejarid pterosaur called Tupandactylus navigans.
It includes nearly the entire body, mostly intact and even including remnants of soft tissue alongside the bones.
According to the team, it is indeed the best-preserved tapejarid skeleton known so far, shedding new light on the anatomy of this pterodactyloid clade.
The remarkably well-preserved, almost complete and articulated specimen of Tupandactylus navigans from the Early Cretaceous Crato Formation of Brazil. Image credit: Beccari et al., doi: 10.1371/journal.pone.0254789.
“This is the first time that we have been able to study more than just the skull of this species,” the paleontologists said.
The analysis suggests Tupandactylus navigans had a terrestrial foraging lifestyle, due to its long neck and the proportions of its limbs, as well as its large head crest that could negatively influence long-distance flight.
However, the specimen possesses all the necessary adaptation for powered flight, such as the presence of a notarium and a developed muscle anchoring region in the arm bones.
The specimen also has an unusually large crest on its chin, part of its already impressive skull ornamentation.
“We described the most complete tapejarid fossil from Brazil, a partially articulated skeleton of Tupandactylus navigans with soft tissue preservation,” the researchers said.
“This specimen brings new insights into the anatomy of this animal and its constraints for flight, arguing for terrestrial foraging ecology.”
The findings were published in the journal PLoS ONE.
_____
V. Beccari et al. 2021. Osteology of an exceptionally well-preserved tapejarid skeleton from Brazil: Revealing the anatomy of a curious pterodactyloid clade. PLoS ONE 16 (8): e0254789; doi: 10.1371/journal.pone.0254789