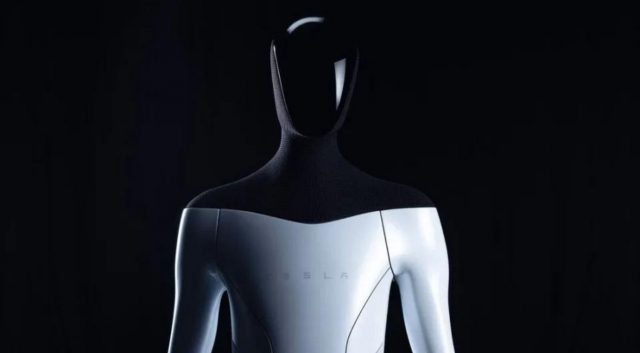 (Image: Tesla)Like it or not, humanoid robots are here. Optimus, a human-like droid powered by AI, is Elon Musk’s latest project—one he insists will be worth more than Tesla’s current vehicle business.
Musk originally unveiled the concept for Optimus (the nickname for what’s otherwise called Tesla Bot) at the company’s AI Day last August. But in a Q1 2022 earnings call conducted last week, Musk mentioned he was “surprised that people did not realize the magnitude of the Optimus robot program,” saying he’d never felt more optimistic regarding Tesla’s future than he was during the call.
“The importance of Optimus will become apparent in coming years,” Musk said. “Those who are insightful or listen carefully will understand that Optimus ultimately will be worth more than the car business, worth more than [full self-driving]. That’s my firm belief.”
At five feet, eight inches tall and 125 pounds, Optimus will be able to see “eye to eye” with many adult humans. Except Optimus (thankfully) won’t have a human face; instead its head will display a screen, though the screen could end up displaying a two-dimensional face if Tesla so chooses. Optimus’ major joints (like its knees, elbows, and fingers), are made up of 40 electromechanical actuators, and it will also sit at about the same height as your average adult. This will allow the robot to carry out tasks in pre-existing environments.
(Image: Tesla)
And that’s exactly what Optimus is meant for. According to Musk’s original announcement, Tesla’s droid is being designed with the intention of performing “dangerous, repetitive, boring tasks,” one odd example of which was going to the store and getting groceries. Optimus will also likely find itself in Tesla’s manufacturing facilities, where it will be assigned more mundane assembly responsibilities. Optimus will use Tesla’s existing full self-driving computer, several cameras, and a neural net to perceive and respond to the world around it.
Optimus may be physically strong, but speed will not be one of its selling points. The robot will be able to deadlift 150 pounds and carry 45 pounds, but it will only be able to move at five miles per hour. If you’re worried about a potential humanoid robot takeover, rest assured: Musk says “you can run away from [Optimus], and most likely overpower it”—the “most likely” part of which we’re not concerned about at all.
Now Read:
Subscribe Today to get the latest ExtremeTech news delivered right to your inbox.
© 1996-2022 Ziff Davis, LLC. PCMag Digital Group
ExtremeTech is among the federally registered trademarks of Ziff Davis, LLC and may not be used by third parties without explicit permission.
We strongly encourage you to read our updated PRIVACY POLICY and COOKIE POLICY.