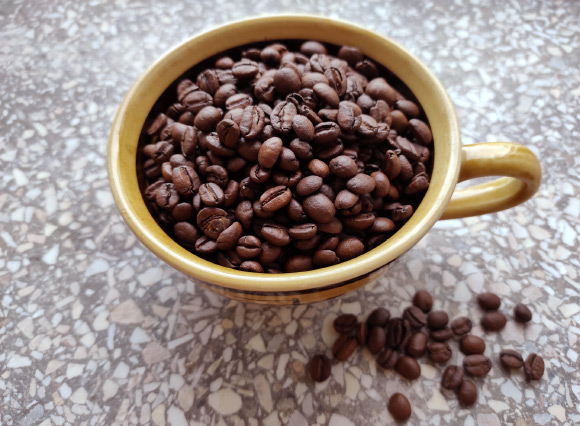 Body is one of ten attributes defined by the Specialty Coffee Association (SCA) that contributes to the overall quality rating of coffee, and, consequently, to the value ascribed to coffee beans. The SCA describes coffee body as the ‘tactile feeling’ of the liquid in the mouth. In a new study, a team of researchers at the Ohio State University investigated compounds that impact tactile sensations of drip brewed coffee.
Linne et al. report several coffee compounds that contribute to the feeling of coffee coating the inside of the mouth, as well as astringency and chalkiness sensations. Image credit: Sci-News.com.
“We’ve known that coffee itself can impact textural sensations, and it was traditionally thought to be because of sugars and lipids,” said Dr. Christopher Simons, a researcher in the Department of Food Science and Technology at the Ohio State University.
“But we finds that this feeling may actually be driven by small molecules, which is kind of unique.”
“This knowledge could help producers and growers make the best coffee. It also could help aficionados attribute certain features of a cup of java to specific compounds, just as wine enthusiasts do.”
Dr. Simons and colleagues set out to isolate the compounds responsible for coffee’s mouthfeel by first establishing a descriptive analysis panel.
They started with four different coffees that evaluators licensed by the SCA had given varying ratings in terms of body.
A separate panel of eight experienced tasters, skilled in tactile awareness, then agreed on a set of references that illustrated the sensations differentiating each cup.
“To better define the term ‘body,’ we broke it down into components that would allow us to look for the compounds driving those particular sensations,” Dr. Simons said.
Four tactile sub-attributes (chalkiness, mouthcoating, astringency and thickness) were used to differentiate the coffees.
The scientists separated the fullest-body coffee into 12 fractions using liquid chromatography and a panel of five tasters screened each fraction.
If a majority ranked a sub-attribute strongly in a fraction, it was further purified to pinpoint the exact compound responsible.
The authors found that a cluster of small molecules contribute to coffee’s mouthfeel.
“We isolated melanoidin compounds, formed by the Maillard reaction during roasting, and for the first time associated them with astringency,” said Professor Devin Peterson, also from the Department of Food Science and Technology at the Ohio State University.
“Two compounds, 3- and 4-caffeoylquinic acid, correspond with mouthcoating.”
“Unexpectedly, the sensation subsided with increased concentrations.”
“Although biological responses are multifaceted, it is uncommon for an attribute to be perceived at low levels, but not at high levels.”
“Finally, we isolated a novel compound related to chalkiness that contains an amino acid.”
The team presented the results this week at the ACS Fall 2021 meeting of the American Chemical Society.
_____
Brianne Linne et al. Identification and characterization of chemical compounds contributing to coffee body. ACS Fall 2021

Cell classes are the building blocks for the central nervous system. It is widely believed …