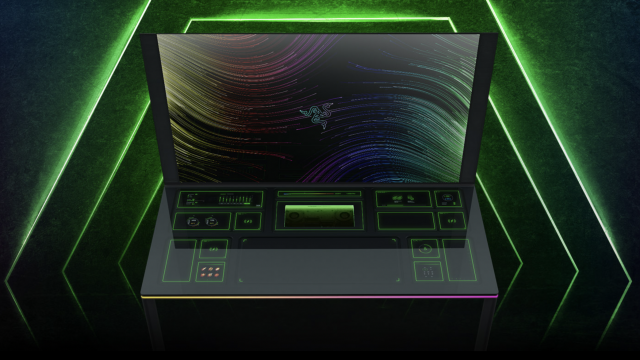 (Image: Razer)When CES rolls around in January, those of us in the tech press always expect a few crazy, next-gen projects to be unveiled. Sometimes it’s a new take on a robot dog or a gigantic television built into and/or taking the place of an entire living room wall. Sometimes, it’s Razer.
Razer is known for debuting CES concepts so outlandish they are unlikely to reach the production phase. and the company didn’t disappoint this year with its latest concept named Project Sophia. Project Sophia is a modular gaming desk with hot-swappable components and a built-in OLED panel, housed in an all-glass, RGB-infused enclosure. It’s the type of product that certainly looks cool, we’ll give Razer that much. As far as its CES concepts go, however, this one is definitely up there in the “never gonna happen” category.
Like all Razer concepts, the company’s landing page for Sophia is remarkably light on details, and heavy on rendered images of futuristic-looking technology. At its core, Sophia is a gaming desk with a glass top, with magnetic “modules” placed all around where the user sits. There’s one for controlling a two-disk RAID setup, system performance monitor,  wireless charging pad, and so forth. The user would apparently be able to grab each module and plug it in to a spot where it’s most convenient for them, allowing you to customize your “desktop” in a way that has never really been done before.
Razer demonstrates this on its landing page by showing different configurations for different users. For example, the “streamer” setup includes a microphone, webcam, and an embedded chat viewer, whereas the “work from home” setup includes a module for viewing your meeting schedule as well as a cup warmer off to the right.
Sophia’s Work From Home configuration includes a cup warmer, of course. (Image: Razer)
Powering the whole thing is “a customized PCB fitted with cutting-edge core components, including the latest Intel processor and NVIDIA GPU,” according to Razer. This assembly is magnetically attached to the underbelly of Sophia, allowing you to snap it out to swap parts. We assume that means upgrading RAM, the CPU, and GPU, but heavily customized systems that promise future upgrades rarely allow them beyond the current generation due to the limits of the pre-installed cooling mechanisms.
Speaking of cooling, the PR for Sophia doesn’t mention how it’s cooled at all, but the renders make it appear like the “guts” of it are a Razer Blade-like laptop module with two exhaust fans. This is typical in a high-powered notebook.
Just above the CPU/GPU area of Sophia is a temperature monitor and a PSU identifier. (Image: Razer)
Rounding things out is an all-glass tabletop with RGB LEDs lining the perimeter. These can be synced to lights elsewhere in the system, care of Razer’s Chroma RGB software. Display options include either a 65″ or 77″ OLED panel which would also increase or decrease the size of the desktop itself, since the display is integrated directly into the front of it. There’s no specs on what the display would offer in terms of refresh rate or resolution. Since Project Sophia is just a concept, this omission doesn’t really matter very much.

Overall this is an interesting take on what a gaming PC could look like in the future, but like most of Razer’s previous concepts, it’s unlikely to ship as a real product that will be available to the public. If you think we’re being too harsh, let us refresh your memory on a few of the previous Razer concepts that were revealed at CES. Probably the most outlandish was Project Christine, was a fully modular tower PC cooled entirely with mineral oil. Then there was Project Valkyrie, which was a laptop with three 17″ 4K fold-out panels. Back in 2011 it debuted its Switchblade UI, which ended up making its way into the DeathStalker keyboard, but eventually fizzled out. To be fair to Razer though, some of its concepts have become real products, including its Tomahawk SFF PC, and its Project Hazel face mask (now called Zephyr). However, those were concepts that weren’t exactly far-fetched at the time. We doubt Sophia will ever see the light of day, but it’s certainly fun to ogle. Also, as a final thought – did Razer forget to include a keyboard?
Now Read:
Subscribe Today to get the latest ExtremeTech news delivered right to your inbox.
© 1996-2022 Ziff Davis, LLC. PCMag Digital Group
ExtremeTech is among the federally registered trademarks of Ziff Davis, LLC and may not be used by third parties without explicit permission.
We strongly encourage you to read our updated PRIVACY POLICY and COOKIE POLICY.