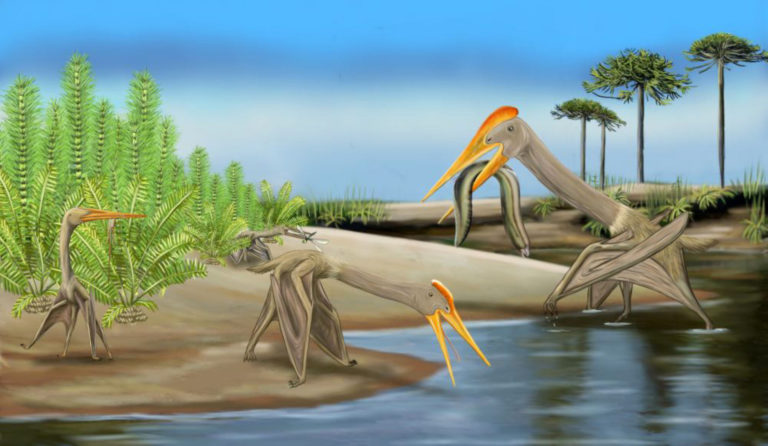 Pterosaurs reached only modest sizes in the Triassic and Jurassic periods. By contrast, the Cretaceous period saw a trend toward large to giant size (2 m to over 6 m wingspans), and while small-medium (less than 1 m to 2 m wingspans) sized forms are known from the Early Cretaceous epoch they are rare in the Late Cretaceous epoch. It had been previously thought that the smaller species were outcompeted by newly-evolving birds, but, according to an analysis of new fossils from very small and small pterosaurs (less than 1 m wingspans) from the mid-Cretaceous Kem Kem Group of Morocco, it was actually the babies (flaplings) of giant pterosaurs who overshadowed their small adult rivals.
An artist’s impression of hatchling pterosaurs. Image credit: Megan Jacobs.
“Over the last 10 years or so, we’ve been doing fieldwork in Morocco’s Sahara Desert and have discovered over 400 specimens of pterosaurs from the Kem Kem Group, highly fossiliferous sandstones famous worldwide for the spectacular dinosaur Spinosaurus,” said Dr. Roy Smith, a paleontologist in the School of the Environment, Geography and Geosciences at the University of Portsmouth.
“We’d found some really big pterosaur jaws and also specimens that looked like smaller jaws — about the size of a fingernail — but these tiny pterosaur remains could have just been the tips of big jaws so we had to do some rigorous testing to find out if they were from a small species or from tiny juveniles of large and giant pterosaurs.”
In their research, Dr. Smith and colleagues examined five small jaw fragments and a neck vertebra of mid-Cretaceous pterosaurs.
“By looking at the paper-thin section of the bones under a microscope, I could tell that they were from juveniles as the bone was fast growing and didn’t have many growth lines,” said Dr. Anusuya Chinsamy-Turan, a researcher in the Department of Biological Sciences at the University of Cape Town.
“We also examined the surface of the bones and found they had a rippled texture.”
“This was further evidence they were the bones of immature individuals as mature pterosaur bones have an incredibly smooth surface once they are fully formed.”
The paleontologists also inspected the jaws and found that the number of tiny holes where nerves come to the surface for sensing their prey, known as foramina, were the same in the small jaws and the big jaws.
“This was more proof we were looking at the jaws of juveniles because if the specimens were just the tip of a jaw, there would be a fraction of the number of foramina,” Dr. Smith said.
“What really surprised me about this research is that the feeding ecology of these magnificent flying animals is more like that of crocodiles than of birds,” said Professor David Martill, a researcher in the School of the Environment, Geography and Geosciences at the University of Portsmouth.
“With birds, there will be perhaps 10 different species of different sizes alongside a river bank — think kingfisher, little bittern, little egret, heron, goliath heron or stork for a large European river. There are several species all feeding on slightly different prey. This is called niche partitioning.”
“Crocodiles on the other hand are much less diverse. On the river Nile, hatchling crocodiles feed on insects, and as they grow they change their diet to small fish, then larger fish and then small mammals, until a big adult Nile croc is capable of taking a zebra.”
“There are lots of different feeding niches, but they are all occupied by one species at different stages of its life history. It seems that pterosaurs did something rather similar, occupying different niches as they grew — a much more reptilian rather than avian life strategy.”
“It’s likely that the juvenile pterosaurs were feeding on small prey such as freshwater insects, tiny fishes and amphibians. As they grew they could take larger fishes — and who knows — the biggest pterosaurs might have been capable of eating small species of dinosaurs, or the young of large dinosaur species.”
The study was published in the journal Cretaceous Research.
_____
Roy E. Smith et al. Small, immature pterosaurs from the Cretaceous of Africa: implications for taphonomic bias and palaeocommunity structure in flying reptiles. Cretaceous Research, published online October 16, 2021; doi: 10.1016/j.cretres.2021.105061