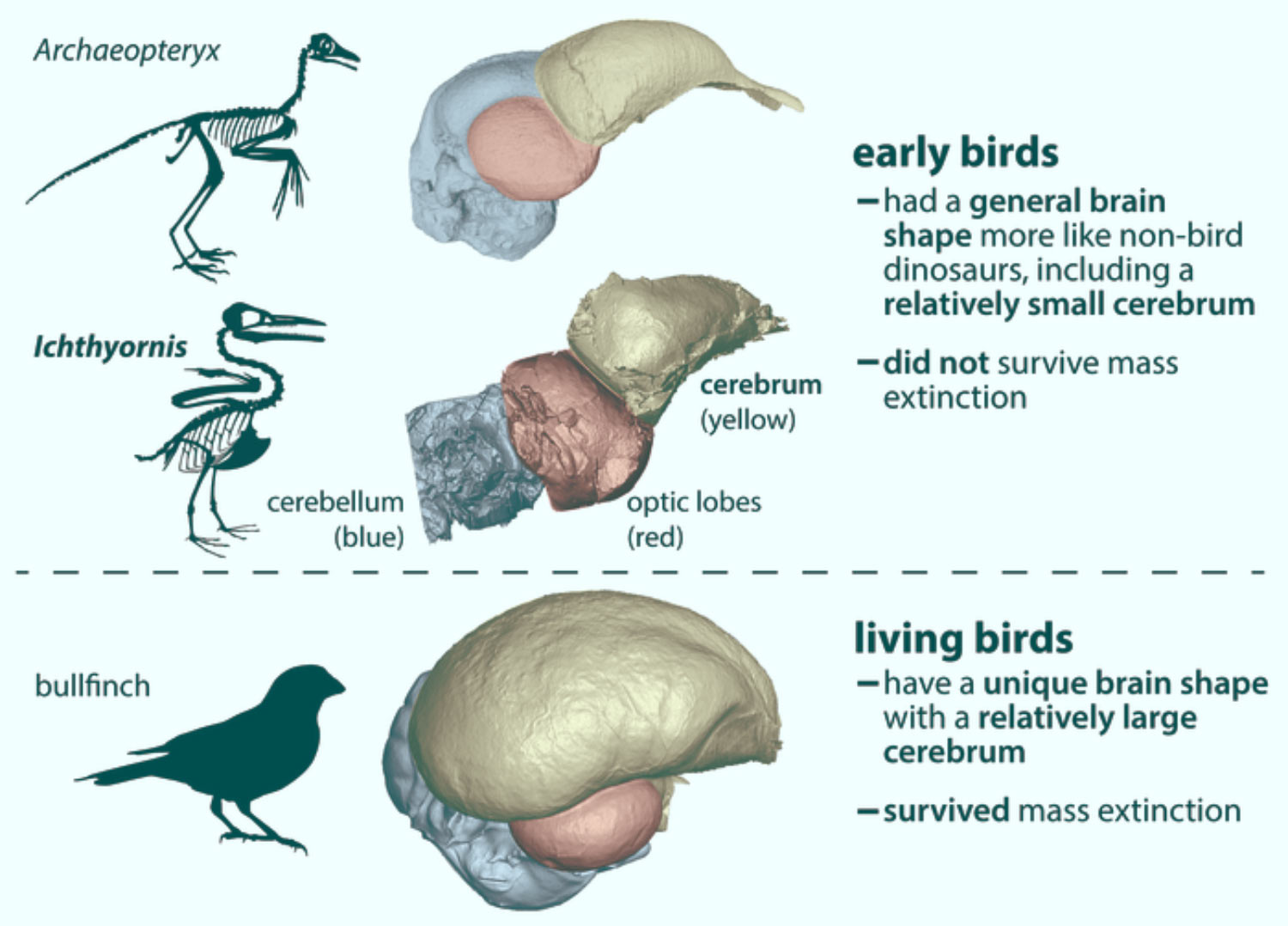 A team of paleontologists has digitally reconstructed the facial skeleton and brain endocast of Ichthyornis dispar, a toothed stem bird that lived in North America during the Late Cretaceous epoch and has traditionally been considered the nearest known well-understood relative of living birds.
The ancestors of living birds had a brain shape much different from other dinosaurs (including other early birds); this suggests that brain differences may have affected survival during the end-Cretaceous mass extinction. Image credit: Christopher Torres / University of Texas at Austin.
Birds today are the most diverse group of land vertebrates, and understanding why living birds alone among dinosaurs survived the end-Cretaceous mass extinction is crucial to reconstructing the history of life.
Hypotheses proposed to explain this pattern demand identification of traits unique to the living birds.
However, this identification is complicated by a lack of data from non-avian birds.
“Living birds have brains more complex than any known animals except mammals,” said Dr. Christopher Torres, a researcher at the University of Texas at Austin and Ohio University.
“This new fossil finally lets us test the idea that those brains played a major role in their survival.”
Photographs and digital renderings of Ichthyornis dispar’s craniofacial anatomy showing evidence of a segmented palate. Image credit: Christopher Torres / University of Texas at Austin.
Using X-ray computed tomography (CT), Dr. Torres and his colleagues examined a 70-million-year-old nearly complete skull of Ichthyornis dispar, a stem bird that went extinct at the same time as other non-avian dinosaurs.
“This fossil helps bring us much closer to answering some persistent questions concerning living birds and their survivorship among dinosaurs,” said Professor Julia Clarke, a researcher at the University of Texas at Austin.
Ichthyornis dispar had a blend of avian and non-avian dinosaur-like characteristics, including jaws full of teeth but tipped with a beak.
With CT-imaging data, the researchers created a 3D replica of Ichthyornis dispar’s brain called an endocast.
They compared that endocast with ones created for living birds and more distant dinosaurian relatives.
They found that the brain of Ichthyornis dispar had more in common with non-avian dinosaurs than living birds.
In particular, the cerebral hemispheres — where higher cognitive functions such as speech, thought and emotion occur in humans — are much bigger in living birds than in Ichthyornis dispar. That pattern suggests that these functions could be connected to surviving the mass extinction.
“If a feature of the brain affected survivorship, we would expect it to be present in the survivors but absent in the casualties, like Ichthyornis dispar. That’s exactly what we see here,” Dr. Torres said.
The results were published in the journal Science Advances.
_____
Christopher R. Torres et al. 2021. Bird neurocranial and body mass evolution across the end-Cretaceous mass extinction: The avian brain shape left other dinosaurs behind. Science Advances 7 (31): eabg7099; doi: 10.1126/sciadv.abg7099