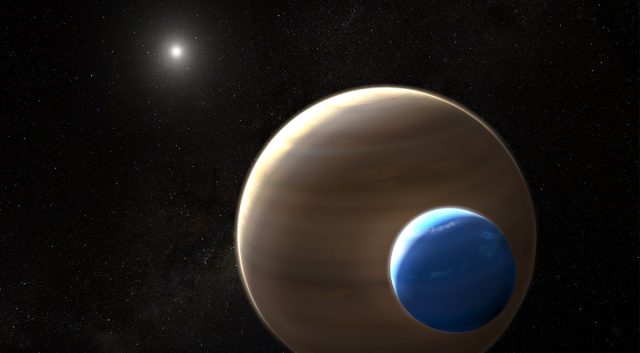 In the last few decades, astronomers have slowly but surely added to the number of known exoplanets. Even the largest planets can be hard to spot, though, and moons are even smaller. Well, usually. A team working with data from the dearly departed Kepler space telescope has reported a possible moon orbiting an exoplanet some 5,000 light years away. It falls somewhere between the size of Earth and that of the gas giant Neptune. If confirmed, it could be the first known exomoon.
Currently, astronomers have confirmed the existence of almost 5,000 exoplanets, but we don’t have any confirmed exomoons on the books. There are a dozen or so candidates, including one identified by the same team in 2018. That one hasn’t been verified yet, and it’s the same case here. Kepler (see below) stopped operating several years ago, but it collected so much data that scientists are still dissecting it. There could be thousands of exoplanets and even more moons hiding in the archive.
The potential moon is in a star system known as Kepler-1708. The planet (Kepler-1708 b) is believed to be about the size of Jupiter, so it’s not unthinkable that it could have a very large moon orbiting it. The candidate moon has been dubbed Kepler-1708 b-i. At the lower end of the size range, Kepler-1708 b-i could be just a little larger than Earth. At the upper end, it could be almost as large as Neptune. That means we can only guess at its composition, but a rocky moon could be habitable.

Like all Kepler observations, the possible discovery of Kepler-1708 b-i relied on solar transits. When Kepler-1708 b passes in front of its star, the luminance dips slightly. Kepler worked by recording the brightness of vast starfields over long periods of time. By watching for repeated dips, astronomers can find exoplanets that are invisible to traditional telescopes. The same goes for exomoons—we think. The signals from moons around those planets is much more subtle, which is why we have yet to confirm any of them exist.
The team notes in the journal Nature Astronomy that there’s a one percent chance the detection of Kepler-1708 b-i could be a mistake. That might sound close enough to the rest of us, but that’s not good enough for science. While NASA’s Transiting Exoplanet Survey Satellite (TESS) can’t see this far away, the newly launched James Webb Space Telescope might have enough power to spot objects like Kepler-1708 b-i. It will be a few more months before we know that Webb is working correctly, but the launch and deployment went off without a hitch.
Now Read:
Subscribe Today to get the latest ExtremeTech news delivered right to your inbox.
© 1996-2022 Ziff Davis, LLC. PCMag Digital Group
ExtremeTech is among the federally registered trademarks of Ziff Davis, LLC and may not be used by third parties without explicit permission.
We strongly encourage you to read our updated PRIVACY POLICY and COOKIE POLICY.