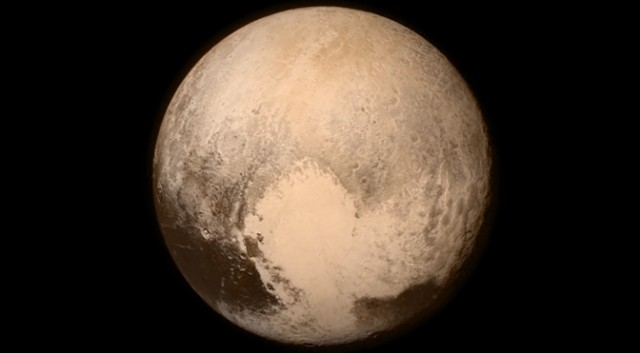 Like many people, I grew up in a solar system of nine planets. It’s the same solar system we live in now, of course, but the definition of a “planet” changed in 2006 to exclude poor little Pluto and its frosty kin. That was before we’d even seen the little ice ball up close, but New Horizons paid it a visit in 2015. Since then, an increasingly vocal minority of scientists has suggested that maybe kicking Pluto out of the planet club was a mistake. A study from a team of noted astronomers soon to be published in the journal Icarus lays out the argument for readmitting Pluto. However, it’ll bring a lot of friends.
Pluto was generally accepted as a planet from the moment it was discovered in 1930, but we didn’t know much about the outer reaches of the solar system at the time. In the intervening years, astronomers discovered more Pluto-like objects in a region of space we now know as the Kuiper Belt — Pluto was just the first one we spotted. In 2006, the International Astronomical Union (IAU) adopted a new definition of what constitutes a planet: it has to be round, orbit the sun, and have cleared its orbit of other objects. Pluto misses on the third, as would other Kuiper Belt objects.
Is that correct, though? The new study argues that it isn’t, claiming the change was based more on astrology than astronomy. By 2006, we already know about objects like Eris and Makemake which would have fit the old definition of a planet. Rather than boost the number of planets every time we spotted a new spherical thing out there, astronomers opted to narrow the definition. According to the study, this improperly sets aside Earth and the other inner planets as “special” in the same way astrology does.
If we invite Pluto to the planet party again, it’s going to bring friends. Ceres and Vesta (not shown) might also qualify as planets under a more relaxed version of the definition.
According to the study, mislabeling Pluto as a dwarf planet is damaging to science and the popular understanding of the solar system. After seeing Pluto up close, many scientists wondered aloud if we had made a mistake in 2006. It has a thin atmosphere, complex geology, and maybe even a liquid ocean. The IAU, they argue, was influenced by unscientific “folk taxonomy” to simplify our picture of the solar system. If we’re going to do science the right way, the study says, we need to accept that there are not eight nor nine planets — the true number may be as high as 150. The paper in question goes well beyond Pluto and argues that the moons of various planets should be considered planets in their own right. It is not clear which objects would be considered moons, if any, under the proposed system.

Eris and Makemake have since been joined by Sedna, Quaoar, Orcus, and others. The more we look, the more “planets” we’re going to find. Should we ignore them simply because it’s inconvenient? And what if Planet Nine turns out to be real? Aside from needing a new moniker, it could again reshape our narrow ideas of what is and is not a planet.
Some scientists have already taken to calling Pluto a planet in their papers, basically ignoring the IAU definitions. If the ranks of Pluto’s defenders continue to grow, we may soon live in a solar system of 15, 50, or 150 planets.
Now read:
Subscribe Today to get the latest ExtremeTech news delivered right to your inbox.
© 1996-2022 Ziff Davis, LLC. PCMag Digital Group
ExtremeTech is among the federally registered trademarks of Ziff Davis, LLC and may not be used by third parties without explicit permission.
We strongly encourage you to read our updated PRIVACY POLICY and COOKIE POLICY.