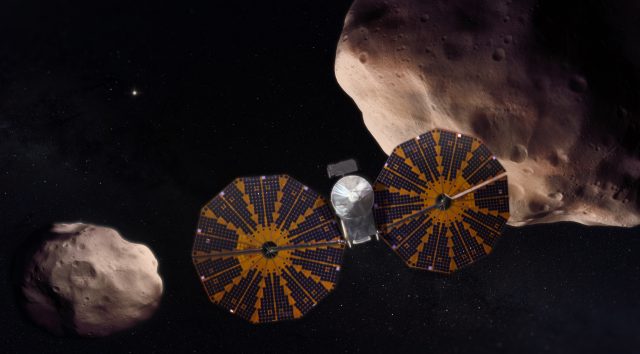 NASA’s Lucy spacecraft is having difficulties with its solar panels. The spacecraft launched on Oct. 16th without incident, and successfully unfolded both its solar panels. But only one of its panels successfully latched into position.
Telemetry via NASA’s Deep Space Network shows that Lucy as a whole is still safe. All other systems are normal. Nevertheless, mission engineers are on the problem.
Initially, NASA acknowledged the issue in a brief blog post, saying, “In the current spacecraft attitude, Lucy can continue to operate with no threat to its health and safety. The team is analyzing spacecraft data to understand the situation and determine next steps to achieve full deployment of the solar array.”
Update (1/30/2022): According to NASA, even without power generation at 100%, Lucy is sailing along in “outbound cruise” mode. The team thinks that a lanyard, which was supposed to pull Lucy’s solar array to full spread, may have lost tension and come unspooled. At a meeting of NASA’s Small Bodies Assessment Group on January 25th, Hal Levison, principal investigator for Lucy, explained that there’s no great rush to find a solution. “We have plenty of time because we’re not scheduled to fire the main engine for a while,” he said. “We’re taking our time to carefully go through our options.”
The current plan is to make an attempt to reel in that lanyard and latch down the solar array “in the late April timeframe”; however, the Lucy mission team is considering leaving it as-is. In the meantime, they’re testing a “dual motor solar array deployment,” which would use both the primary and backup motor. It’s possible that engaging both motors at the same time could apply enough force to get the troubled solar array fully unfolded and latched down.
NASA has had to repair damaged and power-starved spacecraft before. They repaired Skylab while it was in orbit, by freeing a frozen hinge on its damaged solar array. The agency successfully contended with a stuck solar panel on the ISS back in 2006. In 2021, they strategically dusted the solar panels on the Insight lander to restore power.
While the spacecraft itself is not in danger, getting its panels back into mission spec is important. Earth orbits at 1 AU, and the asteroids Lucy will visit all orbit at twice that distance or more. At 2 AU+, the spacecraft will receive perhaps three percent of the power it would receive if it were in Earth’s orbit around the sun.
Lucy’s orbital track, long-term. Credit: Southwest Research Institute
Lucy’s science payload is powered by the solar panels, so its mission could be hampered if those instruments can’t find the power to run. But the spacecraft’s transit to the asteroid belt is controlled by other means. Fourteen hydrazine thrusters, made by Aerojet Rocketdyne, are responsible for propulsion and course corrections.
The fix for Lucy may be as simple as folding the panels and unfolding them. But Skylab was in low-earth orbit, so we had the option to send humans to fix it. We won’t have that option with Lucy, so hopefully the legendary ingenuity of NASA’s earthbound engineers will come through again.
NASA named Lucy after the fossilized skeleton of a hominin who changed our understanding of human evolution. That hominin was in turn named after the iconic Beatles song, which they were blasting on repeat in base camp that night, because reasons. But there are more diamonds in Lucy’s story.
Scientific instruments aboard the spacecraft include a thermal emission spectrometer titled L’TES, and a tool called L’Ralph that includes a color camera and an IR spectrometer. And in company with the black-and-white L’LORRI camera (wow, does this roster sound vaguely Vulcan), Lucy carries for one of its instruments a disc of pure, flawless lab-grown diamond. While multiple sources refer to this information, we still haven’t found an explanation of which piece of equipment will use the diamond disc or how it contributes to the mission.
Lucy’s mission is to visit the “fossils” of planet formation. This includes the main-belt asteroid 52246 Donaldjohnson, which was named for the discoverer of the Lucy fossil. The spacecraft will also visit several asteroids that orbit within the gravitational eddies at the Jupiter-Sun L4 and L5 points: the “Greek camp” and “Trojan camp” respectively. These eddies exist because they sit at points equidistant from the sun and Jupiter. While the Lagrange points don’t themselves have any gravitational pull, they are relatively stable with respect to the two-body system. Inertia lets orbiting bodies cluster there, rather than being drawn off into another path.
Assuming all goes well, Lucy will reach Donaldjohnson in April 2025.
Feature image credit: NASA’s Goddard Space Flight Center/Conceptual Image Lab/Adriana Gutierrez
Now Read:
Subscribe Today to get the latest ExtremeTech news delivered right to your inbox.
© 1996-2022 Ziff Davis, LLC. PCMag Digital Group
ExtremeTech is among the federally registered trademarks of Ziff Davis, LLC and may not be used by third parties without explicit permission.
We strongly encourage you to read our updated PRIVACY POLICY and COOKIE POLICY.

Previous That Lake At Mars
Next Webb Space Telescope